Here’s why ETH and DOGE started pumping almost simultaneously – and what’s the role of Bitcoin (BTC) stagnation in their success.

Star Wars Day of 2021 will be remembered by crypto enthusiasts as one of the most insane days of altcoin’s craze. Ethereum (ETH) jumped almost 9% in 24 hours to print new all-times high above $3,500 while Dogecoin (DOGE) added 33% and touched $0.61 level.

If this isn’t an euphoria – what is?

Ethereum (ETH) rally looks a bit more explicable regarding the fundamentals of a second cryptocurrency. First and foremost, Ethereum (ETH) supporters are more than enthusiastic about London hardfork in July and its possible effects on Ether supply. EIP-1559, the most important update included in London, will introduce periodical fee burnings and elastic fee structure.

Thus, in three months, Ethereum (ETH) will turn into a deflationary asset which in turn, will imminently catalyze its price dynamics. 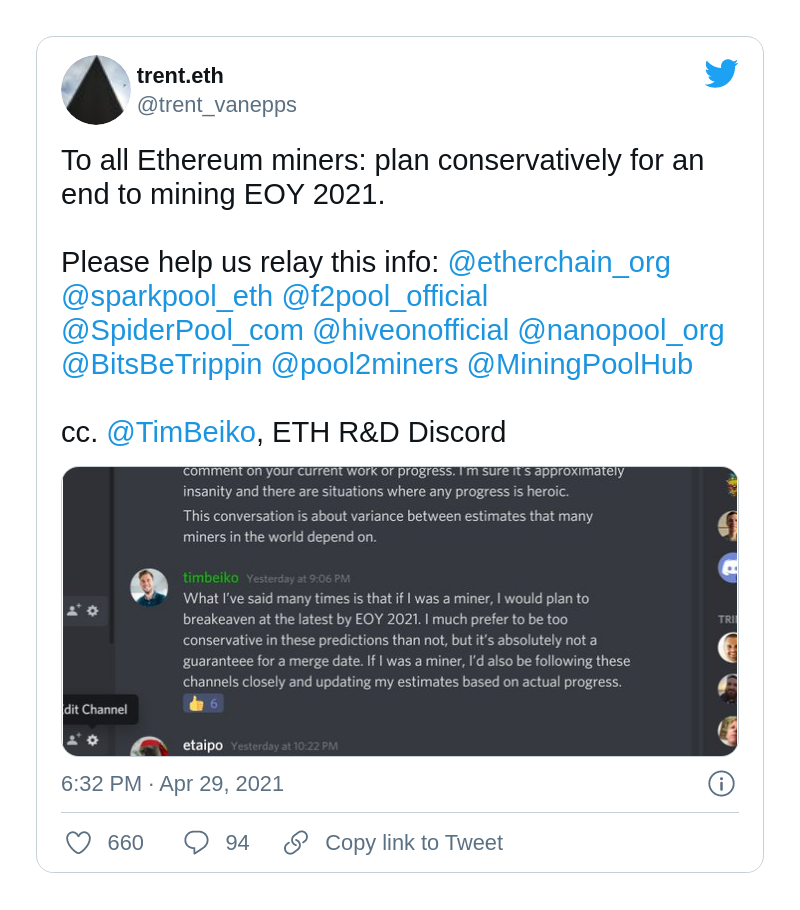 Ethereum (ETH) miners, therefore, should adjust their businesses to PoS model of Ethereum 2.0. Many of them will lock Ethers into ETH2 deposit contract.

At printing time, 4 129 296 Ethers are locked in the contract which is equal to more than $13 billion. Thus, ETH2 market cap surpassed that of Tata Motors leading Indian car producer and Fidelity investment conglomerate.

This network hasn’t launched yet.

In a nutshell: Ethereum (ETH) price has too many catalysts. Its explosive growth has just started.

Dogecoin (DOGE) rally, as usual, should be rather attributed to ‘pumpamentals’ than to reasonable factors.

Fans of Shiba Inu coin are more than excited by another shilling campaign by Elon Musk. The Techno King of Tesla promoted his beloved altcoin in a TV show.

Memetic coin gained 10x in a few weeks only. This process perfectly reflects how overhyped the current phase of crypto market is: DOGE still has zero utility and is mined on primitive Litecoin’s hardware.

At the same time, Bitcoin’s (BTC) pale performance is one of the most powerful catalyst behind the ongoing altcoin season. Traders are tired of waiting for the next episode of Bitcoin (BTC) run and start considering turning their bags to altcoins.

That’s why Bitcoin (BTC) dominance inches closer to three-year lows. Every per cent lost by a king coin strengthens the ‘flippening’ narrative of Ethereum (ETH) evangelists.

At the end of the day, we are still very early. However, the correction will be more than painful, in particular – for the newbies. Markets are entering a very dangerous stage.

If you want to fill your wallet with one of these cryptos, have a look at our partner, SimpleSwap. Their exchange allows you to buy a great number of cryptocurrencies including Bitcoin (BTC), Ethereum (ETH) or Dogecoin (DOGE) with other tokens or credit cards.