For years, Polkadot (DOT) was among the most mysterious and controversial products in the new-gen blockchains segment.

Now, when Polkadot nodes are up and running in mainnet for seven months, the time has come to dive deeply into its mechanisms and tokenomics

Cross-chain interoperability (the opportunity of different blockchains to interact seamlessly with no third-party interference) seems to be the ‘holy grail’ of blockchain progress in 2021. Polkadot Network (DOT) is the first mainstream project that addresses this ambitious goal in a holistic manner.

Polkadot (DOT) protocol was invented by Ethereum’s co-founder Dr. Gavin Wood. Its whitepaper was released in 2016 to introduce the way of operations for ‘a heterogeneous multi-chain framework’. In 2017 it raised $143M in the seventh most successful offering of an ‘ICO euphoria’. In 2019-2020 it added $103M during two private sales: Polkadot’s valuation surpassed $1,2B.

Polkadot is promoted as the most advanced technological concept of the Web3 movement, i.e. flagship decentralized trust-free protocol when users control their own data with no intermediaries. Polkadot nodes allow multiple networks to exchange information directly and seamlessly: it works like a ‘blockchain of blockchains’.

Polkadot utilizes sharded models, i.e. it acts as a network of interconnected sub-chains - this design will be implemented in Ethereum 2.0. In Polkadot, shards are called ‘parachains. Each Polkadot’s parachain has its unique State Transition Function (STF).

Relay Chain is an instrument that facilitates the interaction between parachains, so, as long as the parachain can compile to Wasm and adhere to the Relay Chain API, it can exist as Polkadot’s shard. 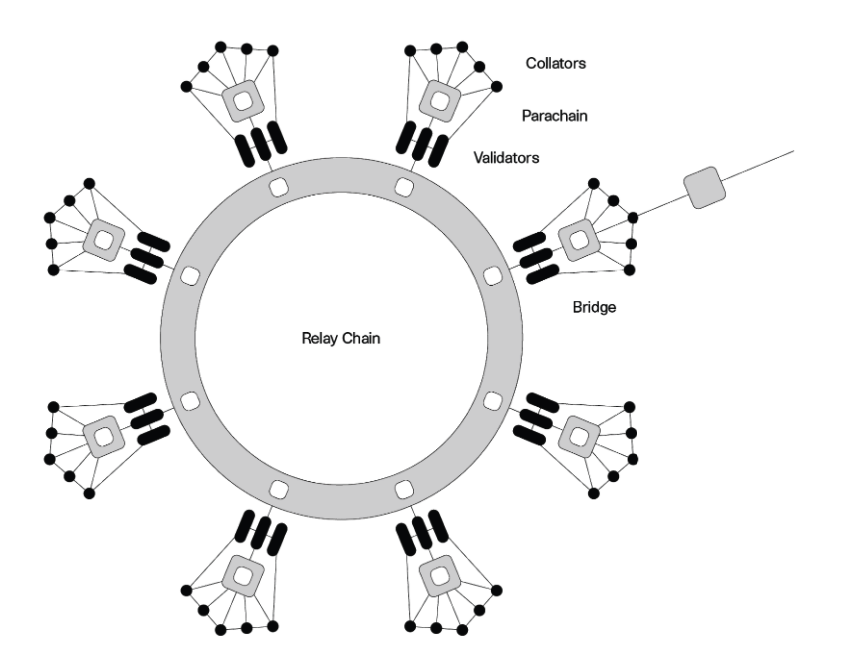 Parachains create and propose blocks to Validators. Validators check them before including them to the network, so the Collators (full nodes of parachains) are free from any responsibility for network security.

As a result, Polkadot nodes’ finality and availability are guaranteed by validators and Relay Chain mechanisms with no risks of ‘slashing’ for connected parachains itself.

Should some network that utilizes different sorts of protocol (e.g. Bitcoin-like blockchain) be interested in connecting to Polkadot (DOT), it can do so through ‘bridges’, specific parachains that guarantee two-way compatibility.

Parachains interact with each other through a Polkadot’s own Cross-Chain Messaging Protocol (XCMP). As a result, the whole system of Polkadot nodes becomes scalable, trustless and consensus-agnostic for its prospective customers.

DOT is a native unit of accounting in Polkadot Network. Nowadays, users are obtaining the so-called ‘Polkadot New Tokens’ as ‘Polkadot Old Tokens’ were denominated 100:1 in August, 2020.

DOT token serves three key functions in the Polkadot network: governance, staking and bonding. In a nutshell, it is the technological framework for the rights and obligations of Polkadot nodes’ participants.

Firstly, the holders of DOT token can participate in crucial governing referendums on network fee adjustments, new parachains addition, upgrades and fixes to the Polkadot nodes protocol, and so on.

Then, DOT is used as the collateral for the ‘good behavior’ of network actors. Fair validators of Polkadot nodes can be awarded DOT for their work, while the malefactors will be heavily penalized by reducing their DOT balance. This resembles closely the way modern Proof-of-Stake and Delegated-Proof-of-Stake systems operate.

Also, DOT tokens are used by Parachain operators for bonding: to connect a new parachain, its maintainer needs to ‘lock’ some DOT tokens for the whole period of connection. Once this or that parachain isn’t active in Polkadot anymore, its DOT collateral is released.

Typically, DOT token is treated as one of the most amazing opportunities for mid-term and long-term investing. Swiss-incorporated investment firm 21Shares AG even released first-ever DOT Trust to let non-crypto investors be exposed to DOT price performance.

Why should we consider Polkadot and its DOT token to be an extremely promising project from a mid-term perspective?

Firstly, it cures major market’s pain, the lack of cross-chain interoperability. Then, it has already delivered solid infrastructure: besides active and stable mainnet, it launched Kusama sandbox platform, Karura DeFi-focused parachain and Polkastarter, a framework for decentralized token offerings (IDOs).

Finally, its native token DOT is integrated into Polkadot’s operations in a very sophisticated manner. So, its performance will highly likely go hand in hand with the protocol progress.