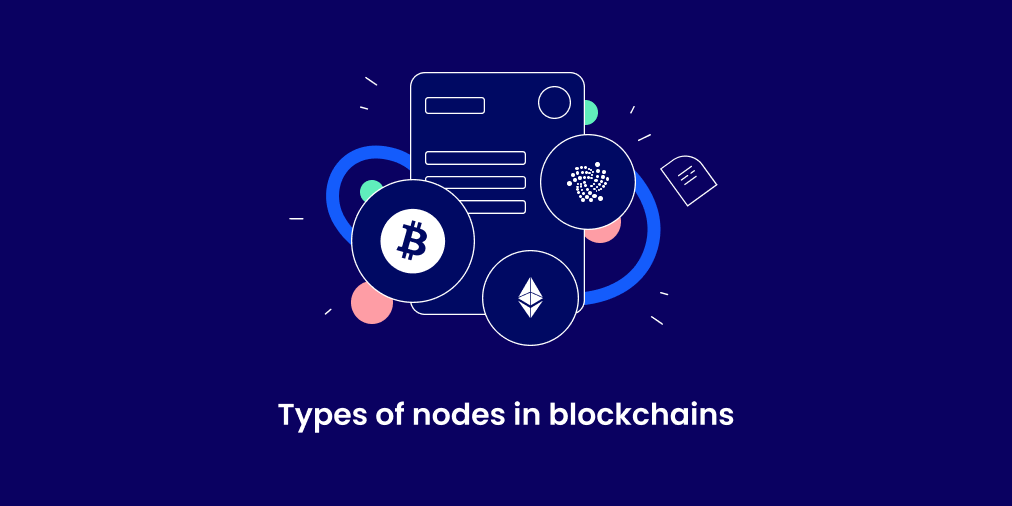 Types of Nodes in Blockchains

A node - is any device connected to the blockchain network and is involved in relaying information.

Any user can run the node. To do this, the corresponding training software has to be downloaded, installed, and accurately configured.

All existing nodes can be divided into three types: miner nodes (type of verification node), full and light nodes.

Full and light nodes are similar in their purpose. Both provide secure storage of network data. Mining nodes are associated with the creation of new blocks in the chain and require large resources: high electricity consumption and the use of powerful equipment.

What are the nodes used for?

The main goal of the node is to provide reliable data storage in the blockchain network.

Nodes maintain a full or partial copy of the blockchain and use their computing power to confirm transactions. Confirmation occurs through a consensus protocol, which includes nodes transmitting information to each other. Each cryptocurrency has its own nodes.

The more nodes a blockchain contains, the more decentralized it becomes. And even more resistant to threats such as system failures or power outages.

How does this happen?

When adding a new information fragment to the current blockchain, the node informs other nodes of the chain about the new block.

Taking into account the validity period and the type of the node of the new block, the checking nodes (validators) accept or reject the newly created block. At the moment of block confirmation, the information is saved and transferred to all existing blocks of the chain.

A full node is a single copy of a blockchain with complete information about it, including transactions, timestamps, and blocks created in the chain.

SPV nodes are usually downloadable wallets. They connect to full nodes to check information in the blockchain later.

Light nodes are much smaller and do not contain the full blockchain information.

Acts as the main server in decentralized blockchain networks. Each block is checked, authenticated, and stored by all full nodes on the network.

Full nodes are overloaded with data, because of this they require more advanced computing power and are energy-intensive, which means they are expensive. They are essential for general safety.

Most Ethereum transactions are regular ether transfers between accounts that are sent to smart contracts via Turing. They perform computation in a virtual machine (EVM).

The trace node retrieves internal transactions quickly as opposed to a full node. It takes a long time to get traces of full nodes due to the fact that they have to be recreated.

The disadvantage of running a trace node is the lack of "fast synchronization" - it takes a very long time to synchronize (more than a month).

The archive node on the hard disk takes 4.5 Terabytes and this is far from the maximum. The node stores not only the most recent state but also the entire history of network events between blocks.

The archive node stores the blockchain states, while the tracing node only stores internal transactions.

This node stores both traces and intermediate states. We can say that this is a hybrid of a trace node and an archive node.

By managing the audit node, you run the cache. The entire transaction history is synchronized and verified first, storing a lot of data for faster queries. After that, the data warehouse is updated as new blocks are mined. Each new block is checked, the process of saving the trace and state occurs.

The node belongs to the user. You don't need anyone's permission to access the data.

Archive node is a decentralized future with reliable storage of the former blockchain.

Miner nodes work on PoW algorithms. The role of these nodes is to perform an action - finding a nonce that suits the current complexity of the network.

The first one to declare their results and receive confirmation from the validators gets the right to add a new block to the working chain. For this action of the miner node, its owners receive a fee in the form of issuing cryptocurrencies or tokens.

Mining nodes are responsible only for the formation of a block with its subsequent addition to the blockchain network chain. They do not participate in the maintenance or validation of future blocks.
Receiving a fee for creating a new block is the main difference between a miner node and a full node.

Full node owners are interested in maintaining and further decentralizing the blockchain.

Miners must run a verification node to determine the criterion (consensus) for valid transactions. This information helps the miner to identify and attach the correct blocks for a reward.

Masternodes cannot add new blocks to the chain, unlike full or staking nodes.

The function of the masternode is record-keeping and verification in the Proof of Stake blockchain. They have the right to reject invalid fraudulent blocks.

Masternodes serve the entire chain, do not create blocks, but they have the right to vote. They send transactions publicly or privately.
To run a masternode, you need special software on the VPS and an Internet connection 24/7.

Staking nodes are applied to coins that use the Proof-of-Stake (PoS) consensus mechanism.

Each node consists of a bet. A bet is a secured amount of a certain digital currency that is blocked by a network participant (stored in a crypto wallet).

As far as PoS coins do not have a mining node, staking operators are rewarded for transaction fees and blockchain support.

This is an intermediate node between validation and lightweight nodes. They connect the blockchain with external users.

For example, in the case of Bitcoin, Lightning nodes are used to shorten transaction times for a fraction of the commission.

These nodes group a certain number of transactions before broadcasting them to the blockchain network. They open up separate payment channels called sidechains, which lightens the burden on the original blockchain by freeing it from confirming every transaction.

Nodes can validate the blockchain and adhere to strict criteria for joining new blocks, playing a critical role in the security and reliability of blockchain transactions.