While the euphoria around non-fungible tokens (NFTs) is gaining steam, it’s time to dive deeply into the basics of this concept.

Blockchain networks allow the storage and transfers of various types of messages: cryptocurrency tokens or coins represent only one of them. Unlike Bitcoin (BTC), second-generation blockchains (programmatic platforms, smart contract environments) can support and transfer really sophisticated objects.

What are non-fungible tokens (NFTs)?

Non-fungible tokens (NFTs) are cryptographically protected blockchain-based assets characterized by unique identification features (metadata). These features distinguish them from each other, so they can’t be exchanged equally like say 1 Ether for 1 Ether. That’s why they are described as ‘non-fungible tokens’.

Besides some unique information, an NFT stores the data about its creator, the time of creation, etc. That fact ensures 100% NFTs tamper-proof and counterfeit-resistance.

In 2017, Ethereum (ETH) enthusiasts started trading Cryptokitties, unique ‘tokenized’ images of cats. Just like Tamagotchi pets, they were fed and nurtured: according to some estimations, their fans spent $20,000,000 on their expensive toys. Some rare Cryptokitties were $100,000 worth each. At the peak of this mania, the Ethereum network congested, being clogged by Cryptokitties-related transactions.

Why are NFTs so expensive?

In 2021, NFTs are highly speculative overhyped products. To provide some context, recently, a tokenized picture, "The First 5000 days" by European graphic designer Mike Winkelmann (a.k.a. Beeple), was purchased for almost $70 million by the NFT investment fund.

So, it’s obvious that, besides the unparalleled scarcity (two NFTs won’t reflect the same object), the interest in this segment is catalyzed by speculative reasons. For instance, the mentioned purchaser of ‘The First 5000 days’ is sure that he/she (the buyer remains anonymous) will be able to send it for $1 billion at least.

Which types of NFTs are trending?

Due to the high complexity of the Ethereum (ETH) protocol, almost every type of information can be stored on a blockchain. Meanwhile, some types of tokens attracted particular interest in the last months.

Tokenized pictures or music albums are the most common type of NFTs. For instance, Nyan Cat memetic GIF-animation was sold for $590K in February 2021. Elon Musk’s wife Claire Elise Boucher, known professionally as Grimes, sold her songs and videos for $5 million in total. These examples show that the NFT concept democratizes the process of art trading and significantly eases it.

Tokenized Twitter publications can be stored on blockchain easily - even on Bitcoin (BTC) that doesn’t support smart contracts. That’s why Twitter founder Jack Dorsey decided to benefit from his legacy and launched a bid for his ‘hello world’ tweet ‘just setting up my twttr’. 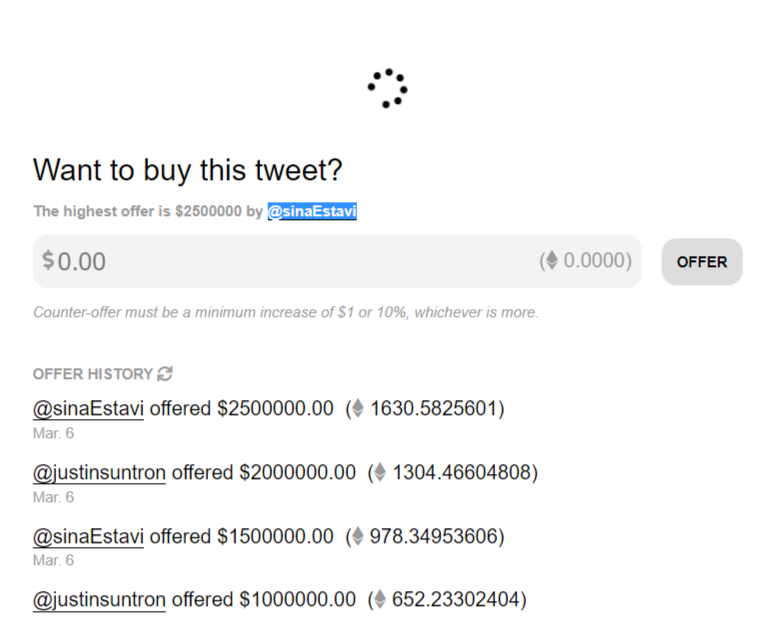 At printing time, the highest price is offered by the crypto entrepreneur, founder of Tron-based Bridge server Sina Estavi. The eccentric multi-millionaire offers Mr. Dorsey $2,5M for his message.

NFTs mechanisms allow tokenizing even people and moments. For instance, NBA Top Shot Marketplace offers to buy the most red-hot moments in NBA history as well as the ‘cards’ with players and teams.

Starting price for the ‘Common’ collections is $14 while rare units can cost thousands of dollars each.

In Lieu of an Epilogue

All in all, NFTs remain the expensive toys and speculative assets for those who have the ambition to benefit from their hype. Meanwhile, there are several ‘serious’ use-cases for NFTs.

Namely, the tokenized diplomas, certificates and so on won’t be vulnerable to counterfeiting and would be easily transferred and verified by Ethereum (ETH) blockchain. Also, the NFTs would be used for tokenization of special rights in the digital era.