This week marks the beginning of the first-ever Kusama parachain auction. This is a very important milestone for the whole Kusama and Polkadot ecosystem, as only with the addition of parachains will these networks be fully functional. The network architecture has two main components. The first component is the Relay chain, which is responsible for the security and finalization of all blocks by its validators. The second component, parachains, is similar to shards in Ethereum 2.0.

The whole structure looks like a tree with parachains branching off the Relay chain. Each parachain will be unique and will add new functionality to the network, and the effect of adding each parachain will be cumulative: all projects and parachains can address each other and use every feature available across the network with no limits, so with every new parachain added it will be possible to create more and more complex decentralized applications. The ecosystem will have parachains with smart contracts, DeFi-oriented parachains with stablecoins and DEXes, decentralized identity parachains, IoT-oriented parachains, and much more.

How do the auctions work and why are they necessary?

Both Relay chains, Kusama and Polkadot, only allow 100 parachains to be connected simultaneously. It’s a technical limitation, and it’s quite possible that the limit will be changed in the future. Also, it’s possible that changing the limit won’t be needed because the Polkadot devs are thinking about scaling the network vertically, like a tree, by connecting another Relay chain with its own set of parachains to the already existing one. But now there are only 100 slots, 50 of them being reserved to parachains, 50 of them reserved for parathreads. A parathread is similar to a parachain, but it connects to the Relay chain only for a very brief time, one or two blocks, to write the necessary data to the block, or perform any other operation.

Every parachain lease a slot for a period from 3 months to 2 years. Right now, there are too many projects wanting to get a slot, that’s why they are distributed via parachain auctions. Slots can be obtained by depositing more KSM than all the other participants during an auction that lasts a week. The closing time is determined randomly, retrospectively – immediately after the official end, a special algorithm calculates the exact closing time, and the project that had the largest KSM balance at that moment gets a slot.

To win a slot, every project needs an enormous amount of funds, that’s why Kusama and Polkadot have a special crowdloan module that can be used to raise funds from the community. It’s pretty similar to an ICO, but it also has one distinctive feature that sets it apart. Despite the fact that users get rewarded with new tokens for donating their KSM in favour of any project, it’s not a purchase. All tokens contributed during the crowdloan campaign don’t disappear and don’t go to the developers' wallet. They get locked during the whole period of slot leasing in case of victory, from 3 months to 2 years, and releasing when the leasing period is over. Thus, users who contribute their tokens, get back their initial contribution and additional tokens of their chosen project as compensation for the inability to stake KSM during the leasing period.

Crowdloans clearly show the favourite projects of the community. The better the project is, the faster it will get its parachain slot. And now it’s time to talk about the projects and to do a quick overview of their functionality and the benefits they may bring to the ecosystem.

The most popular project that will definitely get the first parachain slot is Karura. The second one is probably going to be taken by Moonriver. The rest is unknown. The first series of the auctions will have 5 slot auctions, so the remaining 3 will probably be Shiden, Bifrost and Khala, but everything may change in the future. 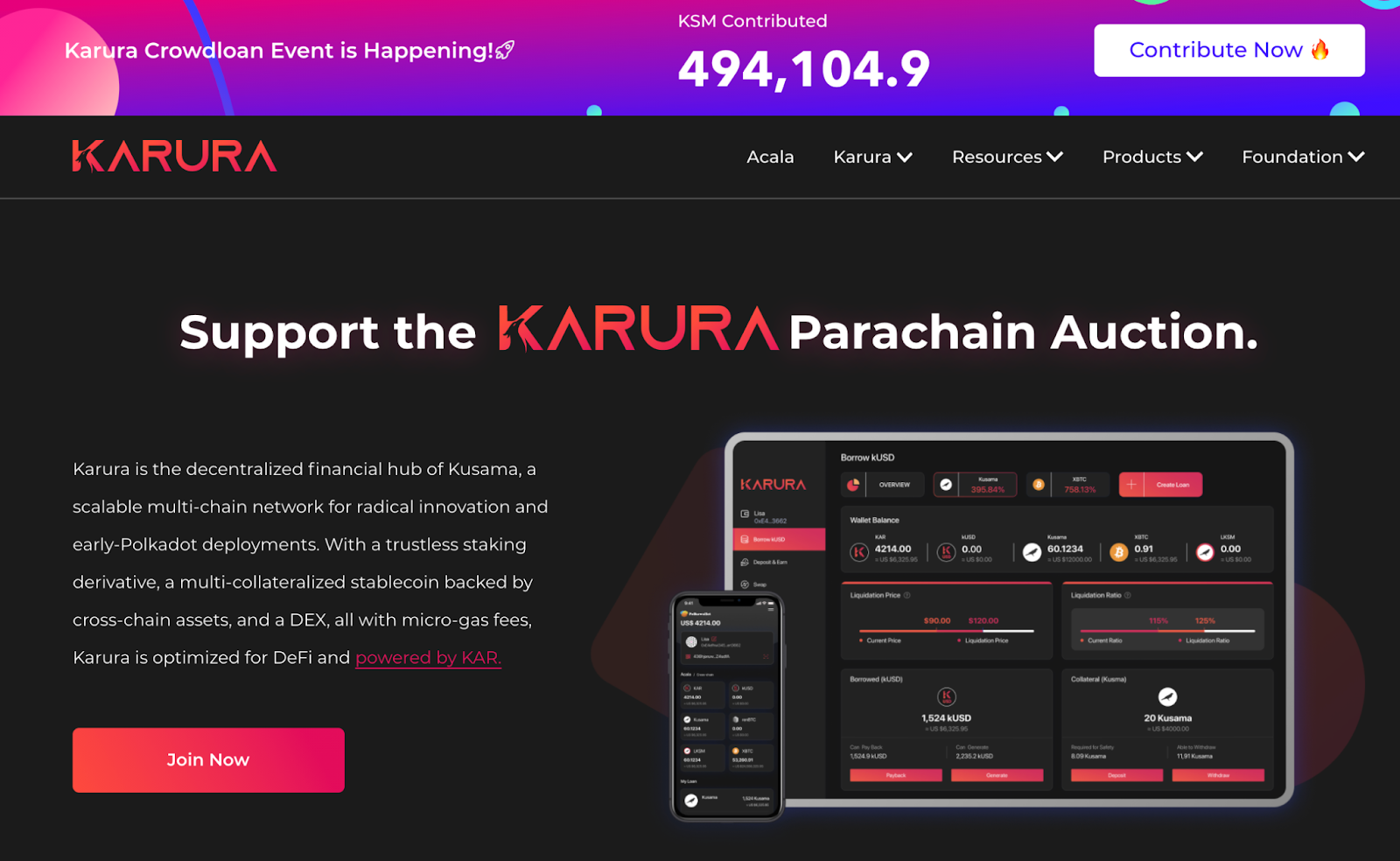 The most important addition is the fully functional DeFi platform, which will increase the trading volume of Kusama tokens and will allow swapping any tokens of the ecosystem without going to centralized exchanges. And the game-changer for Kusama will be the addition of smart contracts with Moonriver and Shiden. The layer of the Relay chain doesn’t support them, thus the connection of both parachains will allow it to compete with Ethereum and will attract new developers to the ecosystem.

Considering the rest, privacy features of Khala aren’t really necessary at this stage, but the decentralized storage of Crust will be very useful for NFT creators and probably developers. That’s only a tip of an iceberg – there’s a lot of other projects that we haven’t covered here, such as the Robonomix IoT platform and Kilt, a decentralized identity platform. All parachains will be interoperable, thus it will be possible to build a project that will use all these mentioned features. We’ll be really looking forward to these times.