Here’s everything you should know about the upcoming Ethereum’s London Hardfork.

Ethereum network is approaching London hardfork activation. It is scheduled to go live in Ethereum’s mainnet at Block 12,965,000 on August 4th, 2021. To date, it is the most anticipated upgrade in the entire history of Ethereum mainnet.

What is a London hardfork?

London hardfork is another major upgrade of the Ethereum network. Just like other hardforks (Byzantium, Constantinople, Berlin), it is named after the capital of a major country. Like previous hardforks, London includes several Ethereum Improvement Proposals (EIPs), i.e. the updates to the rules of Ethereum consensus.

Five proposals are included into London: EIP-3529 that re-considers the way transactional fees can be refunded, EIP-3541 that introduces new types of smart contracts, while EIP-3554 delays the ‘difficulty bomb’ to December 2021 (such updates are implemented periodically).

However, the most crucial upgrades are EIP-1559 that reshapes the fee market model of Ethereum and its ‘sister proposal’ EIP-3198 that expands its experience to smart contracts.

What is EIP-1559 and why is it crucial for Ethereum?

EIP-1559, the upgrade that garnered the most excitement and controversy, brings a new fees model to Ethereum transactional commissions. In the diagram prepared by leading Ethereum development studio ConsenSys, the difference is explained perfectly. 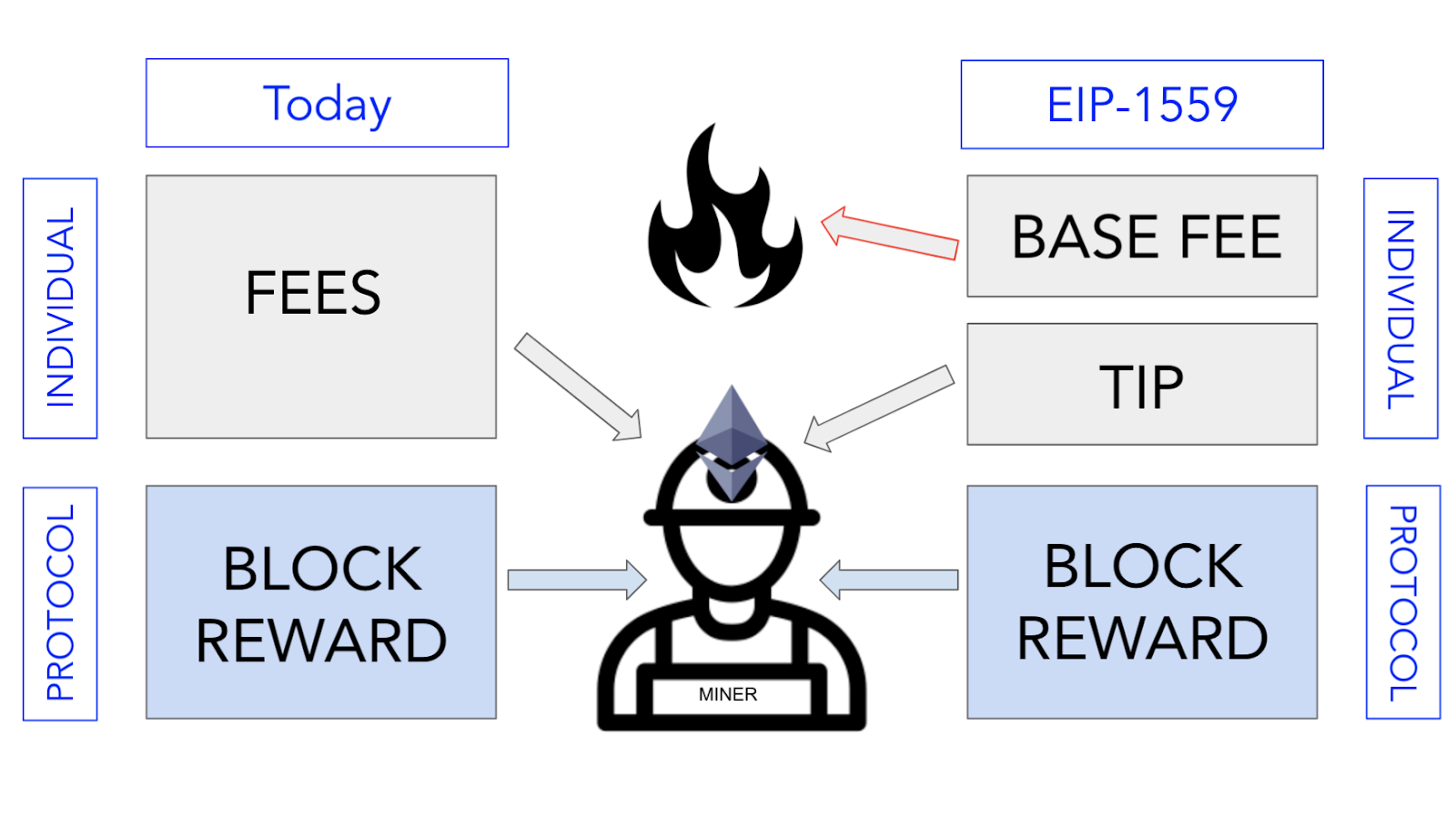 Right now, the miners commissions consist of two parts: transactional fees (‘gas fees’ paid by everyone who transacts on Ethereum mainnet), and block reward (that is issued by the protocol itself). While the transactional pressure on Ethereum increases, the gas fees grow automatically. As a result, users take part in a sort of auction: they pay higher commissions to see their transactions processed faster.

With EIP-1559 implemented, individuals will be charged with base fees and ‘tips’, a voluntary payment to accelerate the inclusion of this or that transaction into the closest available block. Thus, users won’t overpay for using Ethereum for their transactions and decentralized applications.

Periodically, the base fees will be destroyed (burned), i.e. excluded permanently from Ether circulating supply. Base fees rate will change: if the block is more than 50% full with transactions, the next block will be charged with larger fees and otherwise.

Crypto Twitter claims that Ethereum is going to become a deflationary asset with EIP-1559 activated. Is this true?

‘As Ethers from base fees will be burnt periodically, Ethereum supply will be reduced, so, Ethereum will immediately become deflationary’ - that’s how the most common misconception about EIP-1559 looks like.

Ethereum becomes deflationary once base fees will be larger than block rewards. Highly likely, this equilibrium will be reached in late Q4, 2021. Meanwhile, with the uncertainty about the ETH1-ETH2 transition, it is still unclear when and if it will come.

If EIP-1559 is so important, why did it take so long to implement it?

Ethereum ‘s EIP-1559 was opposed by a group of miners that were sure that their incomes would fall dramatically. Ethereum London upgrade is still opposed by Bitfly, Sparkpool while F2Pool is the most active supporter of this move.

By the way, GetBlock provides access to Ethereum nodes via API. Ethereum was among the first blockchains integrated by us, so, our expertise in this field is unparalleled. To ensure the best performance and security for our users, we updated our nodes to Geth v1.10.6. Among other things, this release patches the consensus failure issues with Ropsten testnet.