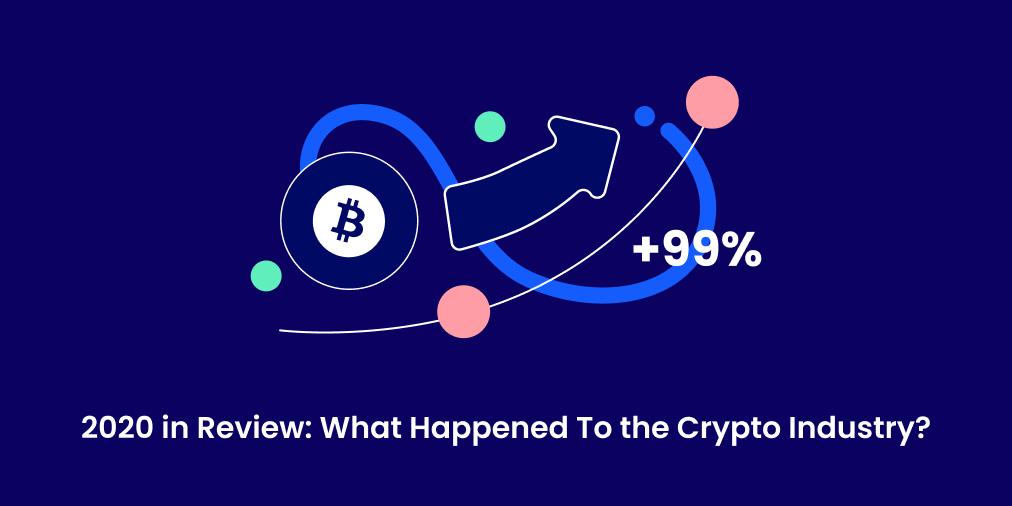 2020 in Review: What Happened To the Crypto Industry?

2020 can be confidently called the year of cryptocurrencies and blockchain technologies.

Crypto experts tend to believe that one of the factors of the increased interest in the topic of digital assets is the Covid-19 pandemic. The chaos in the global economy has spurred investors to take cryptocurrencies more seriously than ever.

In October 2020, the Bank for International Settlements (BIS) and a number of central banks, along with the US Federal Reserve and the European Central Bank, presented a report that outlined the principles by which they can launch their cryptocurrencies. The main purpose of such currencies is to supplement, not replace, cash. This fact only confirms that 2020 has generated increased interest in the field of digital assets and their use in the global financial sector.

Among the world's cryptocurrencies, the greatest excitement during the year was observed around the first cryptocurrency – Bitcoin.

At the beginning of the year, the price of bitcoin started at $7,000, and towards the end of the year, it reached $20,000 and continues to grow. The influx of new funds and new users into the DeFi space is a good claim for the 2021 trend, and the launch of Ethereum 2.0 is also helping.

Bitcoin as a hedge against inflation

In 2020, the US Federal Reserve System (FRS) printed an incredible amount of money – 20% of all dollars. Financial analysts have raised concerns about the possibility of hyperinflation and instability amid a significant surge in Bitcoin (BTC) growth.

Against the backdrop of these events, the CEO of Bitcoin Depot, Brandon Mintz, says that BTC is becoming more stable than the US dollar. Especially for those investors who want to diversify their assets.

Currently, there are over 18.5 million bitcoins in circulation with a capitalization exceeding $428 billion. Since the beginning of 2020, the bitcoin price has shown an increase of 224%.

Also, favorable for the rise in the price of BTC was the statement by PayPal about the possibility for users to buy, sell, and store cryptocurrency. PayPal customers can use Bitcoin, Ethereum, Bitcoin Cash, and Litecoin.

Interest in the cryptocurrency is also fueled by the announcement of investing 1% of its assets ($50 million) in bitcoin by payment fintech Square, led by Twitter CEO Jack Dorsey.

PayPal and Square's Cash app are already buying over 100% of all recently released bitcoins.
On December 17 (Thursday) Bitcoin reached its full-year high of $24,295 and is currently in the process of pricing. Experts expect the bitcoin price to approach $26,000. At the time of this writing, the coin price has dropped to $23,569.45. Trading will not be active during the Christmas period.

More and more retail investors are incorporating cryptocurrency into their investment portfolios to earn compound interest.

Blockchain.com has backed the Bitcoin Cash Node (BCH) chain. The confidence in the fork on the part of users is supported by a steady increase in its price. On December 20th, in less than 24 hours, the price of the coin (BCH) rose 16.5% from $315 to $367.

BCH transactions are faster and cheaper compared to BTC. Bitcoin Cash is great for payments. But Bitcoin is most effective as a store of value. Almost 52 million users have started to store some of their funds in cryptocurrency.

And yet, it should be emphasized that the future of bitcoin cash (BCH) in cryptocurrency markets will very much depend on the state of the world's first cryptocurrency – Bitcoin. If Bitcoin experiences extreme volatility in either direction (up / down), Bitcoin Cash is most likely to fall.

Among Internet entrepreneurs, forecasts are being made about the growth of the value of BCH in 2021 to $3,000. Among the prerequisites is the increase in the adoption of cryptocurrencies and the preference of users in favor of cheaper transactions using Bitcoin Cash.

2020 has been a landmark year for DeFi as well. Ethereum's price has grown 5 times after the smart contract on the network has accumulated 524,288 ETH tokens. This number of tokens was determined as the required volume to launch the upgrade of the Ethereum blockchain to version 2.0.

DeFi has grown this year from $1 billion in "locked" assets to nearly $15 billion. 95% of Dapp transactions in 2020 were in the Ethereum DeFi ecosystem.

Among the most significant (in dollar terms) projects that own more than 50% of the money in DeFi, one should highlight Maker, Aave, and Curve Finance. The first two are platforms for lending and borrowing money, while Curve Finance is a DEX (decentralized exchange).

In 2020, Cardano, Polkadot, Binance Smart Chain, Cosmos, Near, and Flow joined the Ethereum network, although only a few projects are currently active on these blockchains.

In modern society, almost a quarter of the population does not have access to banking services. And these functions can be performed by a decentralized financial system. DeFi has the potential to revolutionize the global economy. And in 2021, we can expect the DeFi economy to be the new global trend.

Closure of an ambitious blockchain project called TON
May 2020 will be remembered for the closure of the sensational blockchain project of the founder of Telegram Pavel Durov – Telegram Open Network (TON). An American court banned the release of the Gram cryptocurrency, which is part of the TON project. The US regulator saw an unregistered sale of securities in the ICO. The ban on the distribution of Gram affected not only the United States but the whole world. Since any US citizen can find any way to access the TON platform after its launch.

TON ceased to exist, on its basis, but already without Pavel Durov, Free TON was launched with the Crystal token. At the time of writing, its cost is $1.09.

How does Ethereum 2.0 work?

The expected event of 2020 was the launch of the updated Ethereum blockchain to version 2.0 (Phase 0) with the Beacon Chain.

Ethereum 2.0 block was created on December 1st at approximately 07:00 am with the long-awaited Proof-of-Stake technology. As a consensus mechanism, it is considered the successor to the existing Ethereum blockchain.

At the time of launch, more than 27,000 validators were involved in ensuring security. To become a validator, you need to have 32 ETH. Staking allows token holders to take part in the long-term growth of the network and receive passive income in the process. The update was launched with almost 900,000 ETH. That is 370 thousand more than the initial requirements of 524,288 ETH.

The recently launched Beacon chain will play an important role in the new blockchain, allowing it to compete with such giants as Visa PayPal.

Obviously, we are at the stage of a heated interest in the topic of decentralized finance and cryptocurrencies, which can help overcome the emerging crises in the financial system caused by the pandemic. Cryptocurrency is becoming a sustainable economic infrastructure, not just a get-rich-quick fix.